Yesterday, I decided to have a Baked Potato.

I love potatoes, I like them with lots of different toppings I like them mashed, baked, chipped, in potato cakes, I especially like Twice Baked Pototoes with ham and sweetcorn, and potato skins with bacon and cheese, or chilli.

But yesterday, I decided to be fancy and have a salad topping.

half way through opening the 2nd can of crabmeat (by the way, i’m also making lunch for himself here, not 2 cans of crabmeat all for myself!!) …I happened to look at the base of the can and realise the BBE was August 2012!!!!!

Now, i’m lenient enough with BBE dates at the best of times, but 8 months? hmmm, I decided to smell it, smelled ok, decided to taste a little, it tasted like sawdust, but it was going to at that stage when I knew the BBE date!

Sadly, I had already mixed in the first can to the salad so all my dainty choppping had to go in the bin, I offered the dog the 2nd can of crabmeat, she declined.

So, I started chopping again, less slowly this time, less neatly, quite crossly, I added some spinach to the mix and a can of tuna, 3 tablespoons Extra Light Mayo (i’m convincing myself it’s as good as the real thing) and divided the whole lot up over 2 baked (in the microwave) spuds.

It was delish, really delish, i’m converted to salad and potato. Of course the spuds were Maris Pipers which in my humble opinion are the most tastiest of all.

From a SW point of View – this meal was 1 syn, for the extra light mayo, which is actually quite nice (when you don’t have the real stuff beside it to compare to!)

Ever wanted to make something for lunch, but weren’t sure just what?? I wanted something tasty, that looked good, but needed to include a salmon fillet as I had some defrosted.

A fridge forage later and I’m grilling red peppers on the George foreman until they were charred and soft. I got some Levi Roots Reggae sauce and spread a tablespoon over each salmon fillet (1 Syn) and grilled those too.

Meanwhile, I chopped some fresh beetroot, cherry tomatoes and red onion along with 50g crumbled feta (healthy A allowance, I had Half of this salad) and added some balsamic vinegar.

I served a salad plate piled with fresh rocket, the tomato salad, roast red peppers mixed with steamed mangetout an the salmon fillet, along with a small baked potato.

When we (hubby and I) got a rare opportunity to have an afternoon out together (requiring a drop off to a party for no.1 and a babysitter for no.2), we decided to have a lunch date. My friend recommended The BallyMore Inn, in BallyMore Eustace, Co. Kildare, a ten minute drive from where my friend lives, meaning we could drop no.1 to the birthday party and escape!

We got a late Lunch booking at 3pm (when the kitchen finishes) and requested a table with plenty of room (for my cast!) we arrived at 3.05 and were shown to our table. Dieting was furthest from my mind and we ordered starter and main each, chicken wings for himself and pâté for me.

While we waited for our starter, we were given warm fresh bread with a divine roast fennel and garlic oil dip and a pat of fresh butter. The oil dip was so good we bought a tub from the a kitchen Shop when we were leaving.

We have a long standing habit of ordering chicken wings in a new restaurant, these were lovely but we prefer them a lot spicier! The pate was delicious and came with toasted brioche and tomato chutney which was very tasty.

For main I chose the sirloin steak with red wine butter, it came on a bed of celeriac mash, which I have never tried and I am now converted! In a small bid to be healthy, I ordered a salad instead of fries and it too was very good and I’m getting to really like having a salad with a steak now, it’s a good habit I’ve formed since joining slimming world. 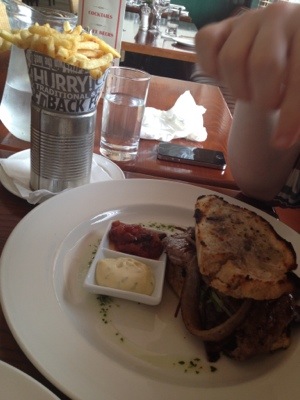 Himself opted for a steak sandwich with fries, I pinched some of the grilled red onions and they were yummy! Fries were skinny and served in a cute paper cone.

We couldn’t not have a dessert, so we decided to be extra romantic and share one. At this stage it was about 4.15pm, we were the only diners left and were concious that the waiting staff needed to be getting on with the dinner set up but our waitress was quick to reassure us that there was no hurry and we were welcome to take our time! We chose the warm homemade brownie with vanilla ice-cream, and asked for a scoop of praline ice-cream as well! It was absolutely gorgeous, so nice in fact that I asked for the praline ice-cream recipe which Georgina kindly sent on to me and I will make soon! 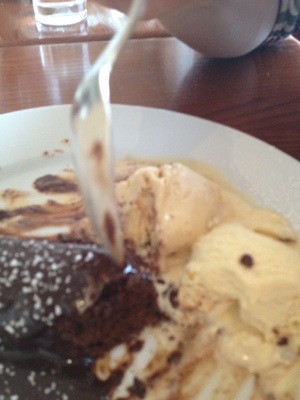 We lingered over coffee, looking at photos of the kids and chatting. What’s rare is wonderful and our date was so lovely we didn’t want it to end, not a bad thing to say after 6 years of marriage!
Unable to resist, we bought homemade pesto (to which no.1 is now addicted to on pasta), the fennel dip, humous and some chocolate chips for baking!

Overall the meal was great and We look forward to a return visit.

A little while back, I posted about falling over (ok, I lost my balance trying to take off my wellies after a concert, at 3am..). My first visit to Accident & Emergency was at 10am that morning, X-ray showed no fracture but foot was very swollen, so I was asked to wear an Air Cast (also called a Moon Boot- a rigid, knee high support boot with inflatable air cushions) and keep off the foot using crutches and come back in 5 days for a other X-ray.

On Friday morning I presented again to A&E and this time I was sent for an MRI, I didn’t have to wait long, and the doctor advised me to go home instead of waiting for results and he would call me with an update. Later that afternoon he called me to say nothing untoward could be seen and to await a call from physio department. He called that evening and I had an appointment for the following Thursday, 6 days later.

5 minutes into my 6pm appointment and Chris the lovely physio was on the phone to the orthopaedic department, and when he didn’t get an answer, ran down himself and came back to me with a 4pm appointment the next day to see a SURGEON! Now, I expected to be going into physio for a support bandage to wear home and some exercises, not to be told I had a suspected “LisfrancInjury” (I had to go home and google, then got a but faint and stopped googling because I was sure he was wrong!)

Wednesday 7am arrived, I had tea and toast as instructed, my last meal (whole meal toast, of course) and headed off with my brother for the Beacon. CT scan first then weight bearing (ow!!) X-rays, my brief google investigation told me that the LisFranc fracture would more likely show on a weight bearing X-ray due to the nature of the injury.

At 2pm I was brought to my bed in surgery ward to await my slot and I was called at 4pm. By this stage I was very, very grumpy because I was very, very hungry!!! I was still hoping, right until my surgeon came with consent forms to the pre-op area that I would be going home! Far from it alas, Dr. Laing arrived and told me that not only was it not just a sprain, I had ruptured the ligament, had 3 fractures and some bone fragments hanging around inside there too.

When he started drawing lines on my foot I started hearing white noise and feeling faint so I just closed my eyes until I was wheeled into theatre…this was at 5pm, I was brought back to my room at 9pm, 2.5 hours of surgery, 5 metal screws, 4 pins and some wires outside later..I was done!

Now to the important details, the food!

My throat was too sore after the ET tube to manage toast that night so I just had tea and a very broken night sleep, foot surgery hurts like hell!!

The food during my stay in the Beacon Hospital was excellent and it was even possible to stay within the SW theories…..except I didn’t and had dessert both days!

Both mornings I had grilled bacon, scrambled eggs, grilled tomatoes and wholemeal toast.

Dinner, served at lunch on day one – salmon fillet with dill sauce, baby boiled potatoes, green beans, side salad (with the cutest pouch of balsamic vinegar and e.v. Olive oil) was really tasty!

Dessert (well, I was convalescing) apple pie with vanilla cream

On the second day, the day I was leaving, for dinner I had supreme of roast chicken breast, with mashed potato, carrots and peas, and side salad 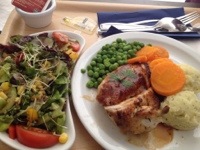 And my favourite dessert -profiteroles – so light and fluffy and creamy

And finally, the fun bit -no.1 decorating the cast in what he has decided is my favourite colour, purple, his theory being he will “make it all pretty so mammy will be happy” bless him!!

The reality of coping with non-weight bearing on crutches with 2 children, on of whom is 4 months old is harder than I imagined, but we are coping, and using a wheeled office chair, I can rest my left knee in it to get around the kitchen and keep cooking!

On Tuesday, my friend J called over to visit, and to take myself and No.2 out for lunch. He let me pick, so I suggested one of my favourite local restaurants, Bijou Bistro in Rathgar. I had been here twice … END_OF_DOCUMENT_TOKEN_TO_BE_REPLACED